Drawing your first sprites to the screen

Creating a 2D sprite and getting it displayed on the screen is a very quick and painless process using the XNA framework, so let's get started!

Drawing the Sprite on the Screen:

On to the code! To begin with, let's add a class level variables to store the texture and it's position. If you're a bit confused by the terms "class", "variables" or other coding terms, now would be a good time to stop and head on over to this FAQ on the Creator's forums to brush up on your C# coding skills. Trying to learn both how to program in C# AND learn how to use the XNA framework and how game development works will become overwhelming fast! You won't need to become a C# expert, but you should at least go learn the basics first.

Go ahead and add this code to the top of the Game1.cs class.

Now, let’s go ahead and load our texture. We’ll do this by adding some code to the “LoadContent” method. You don't need to create the "LoadContent" method, it's already created as part of your Game1.cs class when you create your Windows game project. We will just be adding a new line of code to this method to load our sprite texture.

The line we added, uses the Content Manager to load the "SquareGuy" image we added tot he project into our Texture2D object.

With the Texture2D object loaded, we can now draw our sprite tot he screen. All of your drawing should be done in the "Draw" method. This is another method that already exists in your Game1.cs class. It is created when you first create a new Windows game project.

Add the following code to the "Draw" method.

The spriteBatch object is automatically created when you make a new Windows game. SpriteBatch objects are what is used to draw 2D images to the screen. To use them, you first have to initiate "drawing" by calling "Begin".

Next, you draw all the images you want. In our case, we're currently just drawing a single sprite to the screen, but some games might have hundreds or thousands of "Draw" calls. With our "Draw" call, we pass in the sprite texture we want drawn. The position in the game screen we want it drawn in (our current position is X=0 and Y=0) and what color we want to shade our sprite (using White, tells the SpriteBatch object that you don't want to apply any shading to the texture).

Finally, you tell the SpriteBatch object that you've added all the things to the scene that you want drawn and you tell it to go ahead and draw them all by calling "End".

And that’s that. Build

your game and give it a go. You should see the Square Guy sitting in the upper left of the game window. Just click the Close button on the game window to stop the game. 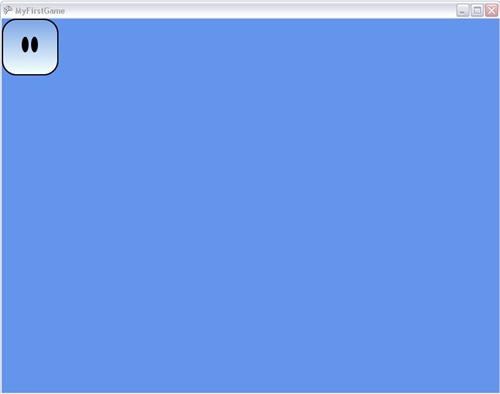 Changing the Position of the Sprite

The position of our sprite is stored in our Vector2 object we created mPosition. To draw the sprite in a new location, just change these values. Go ahead and play with these values and see how they work. Change the X position, then the Y position. When you change the line of code to look like this. Where is it drawn?

Change this line of code.

and see where the sprite is drawn. 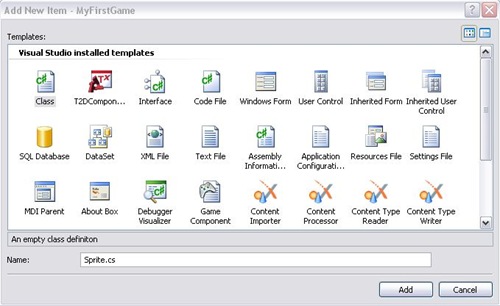 Now that you understand how to draw an image to the screen. Let's work on creating a "Sprite" object so it's easier for us to work with multiple sprites. Start by right-clicking on the project, pick Add -> New Item.

Select "Class" from the "Add New Item" dialog and then type in the name "Sprite" into the Name text box. Click the "Add" button when you are finished.

This will add a new class to your game called "Sprite" we are going to use this class to create Sprite objects in our game.

When you created the new class, the code window for the class should have opened.  We are going to be working with some XNA Framework objects, so we will need to add the following "using" statements to the top of the class file.

Next, just like we did in the Game1.cs class when we were learning to draw an image to the screen, we are going to add two storage objects to the Sprite class to be used in the same way.

Add the following code to the top of the Sprite class (I included the class declaration and name for reference of where you need to add the code).

You can see that there is a little difference for how we declared our objects. We made the Position object Public and the Texture2D object private. This means that the Position can be changed by things outside of the class and the Texture can not. If you're a little confused by terms like "Public" and "Private", you might want to go do some more training on C#.

Add the following method to the Sprite.cs class.

You can see that the LoadContent method for our Sprite class takes in some parameters. The Sprite class does not have a ContentManager to do it's loading so it "asks" for one. It also wants to know the name of the asset that it should load into it's Texture2D object. Both of those values will be passed in when the LoadContent method is called. So now our content is loaded for the sprite, we now need to Draw it. We will once again copy the way the Game1.cs class works and add a "Draw" method to our Sprite class.

Add the following method to the Sprite.cs clas

Since the Sprite class does not have it's own SpriteBatch (it's a good idea to try and limit the number of SpriteBatch objects you are creating for your game), the Draw method in our class will ask for a SpriteBatch object that it should use for drawing itself.

We have now created our Sprite class. You should be able to Build

the project with no errors now and the Image should still draw BUT it's not being drawn by our new Sprite class, we just haven't removed our old code yet.

Now, add the following line of code to the Game1.cs class. This will be our Sprite object.

Next we want to "create" our Sprite object so that it's ready to be used in our Game1.cs class. To do that, add the following line of code to the "Initialize" method. The Initialize method is another one of those methods already created for you when you make a new Windows game.

Calling that will load the SquareGuy asset into the Texture2D object in our Sprite class. Now we just need to Draw the Sprite to the screen. To do that, modify the Game1.cs Draw method to look like this.

We removed the previous draw code we had written and instead are now calling the "Draw" method of our sprite object. When you click Build

now you should see that happy little Square Guy in the upper left of the screen. The difference is, this time you've written the code to be a little more Object Oriented and so it's a little more reusable for future projects.

This changes the Position of the sprite so that when the Sprite draws itself, it uses the new positioning information you gave it. You can also change just an individual X and or Y position of the Sprite by writing code like this.

now and watch where the Sprite is drawn.

Now that we have our sprite class, adding a second Sprite to the game is really easy. To add a second sprite, just follow the following steps.

Now go ahead and Build

your game, you should now see two sprites drawn to the screen in the locations you have given them. Do you think you could add a third?

That's it, congratulations on getting your first (and second!) sprite drawn to the screen! It might not seem like a lot, but this is the first step in building up some of the basic concepts you will need for making your first game. Go ahead and experiment a little. If you get stuck on something, take some time to search the forums and see if you can figure it out. Most of all, make sure you're having some fun!